I have been spending the majority of my ranch work time in the heifer field. Heifers (young cows that have not yet had a calf) are considerably more difficult to calve than mature cows. They are smaller, and often need a little help getting that first calf out. They are also inexperienced mothers. They sometimes need a little coaxing to accept that their new calf does indeed belong to them, and help figuring out just what they are going to do with the slimy looking little thing. This is why we calve the heifers first, and in their own separate field – so they get a little more TLC.

Our cows have now started calving as well, so today I headed out with Dear Husband to check on their progress. Today seemed to be one of THOSE days.

DH and I jumped on the gator to head out. Our old dog Benson wanted to come too. He loves to go everywhere with Aaron, and is the most faithful family pet anyone could ask for. But there are very specific reasons why I have dubbed him “Useless Cowdog”. The most specific being that he is completely and utterly useless. Lovable. But useless. Unfortunately, he is completely oblivious to his uselessness, so leaving him behind wasn’t an option. One thing is certain, he really doesn’t care if I am comfortable, or even if there is room for me at all, as long as there is room for him in “Ben’s Spot”.  No Ben – this is not comfortable for me. In any way. 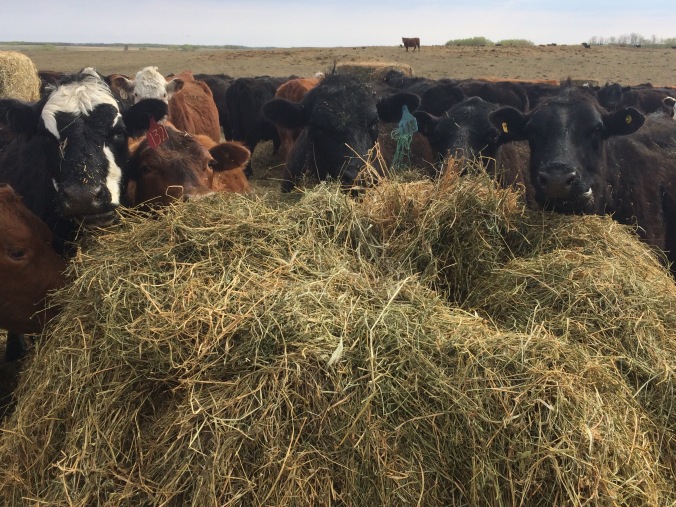 We checked out the freshly fed cows. Aaron had brought along a bottle of powdered colostrum to give to a calf that appeared to be deserted by its mother. Aaron had already grabbed the calf once. When he was out feeding the cows he scooped it up and was in the process of bringing it back to the yard when it let loose a full stream of calf pee all over the one and only clean tractor cab that we have. The calf was promptly set back outside to find its mother on its own. We hoped that some warm milk in it’s stomach would give it the energy it needed to go track her down.  That didn’t quite go as planned either. After getting perhaps a quarter of the milk into it, the calf decided to resist and managed to pop the top off the bottle. The remaining milk ended up on the ground, along with Aaron’s patience.

While all this was going on, I complained about the “snot-cicle” weather in May. It was COLD!!!

While checking the rest of that group of 600 cows, Aaron stopped and asked me to guard a gate (stop the cows from leaving while he left it open). I paused, looked at him, looked at the dog taking up 78% of my gator space, looked at him again. I happily hopped out to guard the gate – after he admitted that yes, the dog is useless. 🙂

We left the pasture, then decided that the poor motherless calf probably wasn’t going to find someone to love her (or feed her) out there anytime soon. We headed back to grab her and haul her back to the yard.

To add insult to injury – no wait….. To add injury to insult, when I lifted my hand to snap the picture, calf decided to struggle, kicking me squarely in the face in the process. I can now tell you a sure fire way to get Kendall Jenner lips without the filler.

The moral of the story – we need a bigger Gator!!!

2 thoughts on “Adventures in Calf-Checking (and why we need a bigger Gator!)”